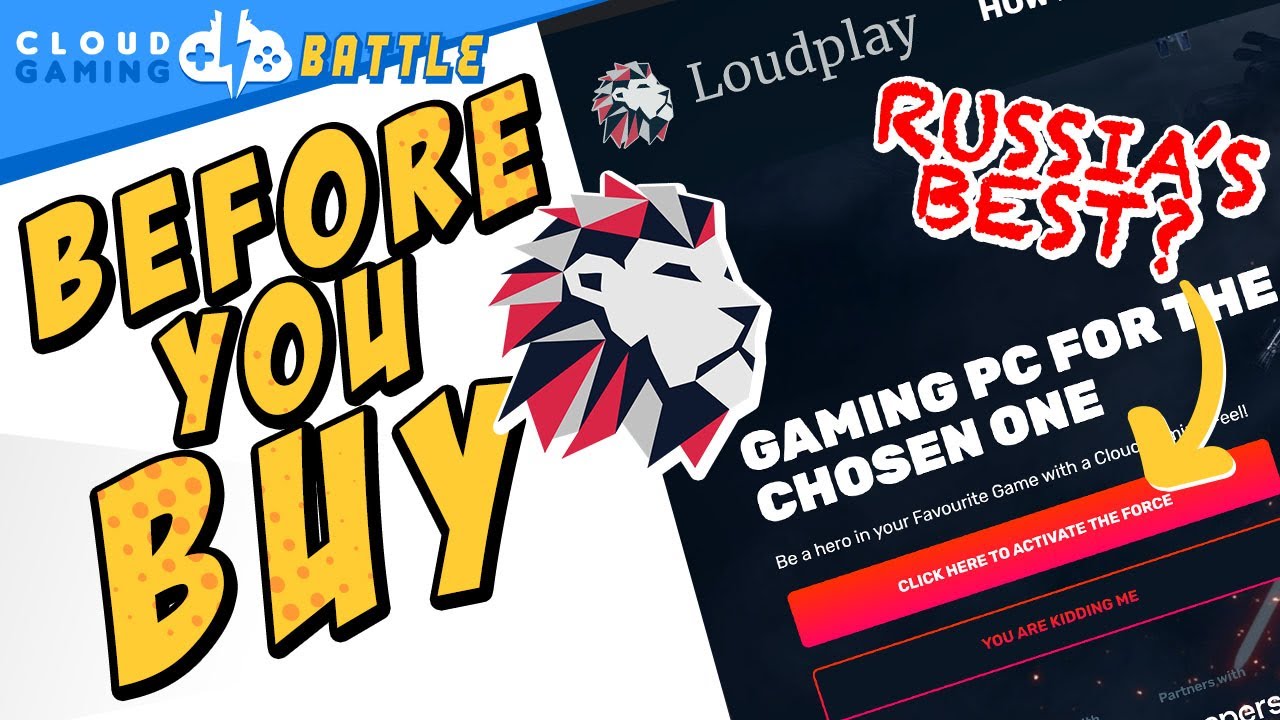 Loudplay is a cloud gaming service that is located in Russia. We define Loudplay as a credit based cloud PC rental service similar to Shadow and Maximum Settings. PC Rental services offer a fully function Windows PC based in the cloud that allow you to install and run any game or software that you would on your home PC. Is this service for you? We got all the details. Let’s go loud!

If you are a PC gamer, getting a cloud based PC where you can install any game you want to play anywhere you want is ideal – especially when mobile gameplay is at a high. Loudplay has a desktop app and an Android app that will let you access your remote PC.

This is a credit based service so you have to purchase time to your account in order to use your machine. They offer a free hour to begin with but who uses just an hour of time? More on this and payments later.

The app is a well built app. It looks nice and functions well. I actually wish Maximum Settings would make adopt an in-house app that functioned like this. They even have a tutorial with a step-by-step wizard that highlights how to use the app. Very intuitive.

Please note that Loudplay servers are in Moscow, Russia and we are located in Cleveland, Ohio, USA. This is quite the distance away to be playing effectively on a cloud PC. That being stated, I prepared myself for the worst and honestly, I still wasn’t prepared for what I experienced.

When I finally got into my machine, I was flabbergasted at how low the resolution was 1366×768. But I was also equally surprised at the version of Windows they were using – Windows 10 Enterprise. It’s like they have the money but used it in the wrong places.

What is nice is that they have keyboard shortcuts to manipulate the Loudplay stream. If you don’t want to use the shortcuts, they have an on-screen icon with a menu so you can manipulate the stream from here so you have options.

Loudplayis directed to gamers and they know the most popular distributor platforms will be used to play PC games, so they already have most of them loaded on your machine – how nice of them. Naturally, I choose to play Call of Duty Modern Warfare first – naturally.

The installation was a nightmare. It took upwards of 5 hours to download. Granted, Modern Warfare is over 200gb but the download rate was godawful. That’s all time you just paid for down the drain. What really kills me is that next day, the download rate for a patch was crazy fast. Was this just this game or Loudplay?

I tried downloading Far cry 6 from Ubisoft Connect. Same thing. The download rate was slower than my digestive system after Thanksgiving.

Going back to Modern Warfare, after finally jumping in game, of course you have to install the shaders – duh! Now, what you need to know about Louplay is that if you overload your machine with bandwidth or heavy processes like installing the shaders, you will lose connection. I lost connection multiple times installing these shaders and my app bandwidth settings were low.

So how is actually playing the game? Once I finally got done with installation, I took a look at the graphic settings. Yep, everything is set to low. We performed a full benchmark on our Loudplay machine using PCMark and 3DMark and well, things aren’t good – at all. Check that video above for reference.

Gameplay is what you expect. Super low quality but I was able to play. We have a playlist of really horrible gameplay we captured if you are interested. And Yes, lag is abysmal. But of course, this is to be expected from a cloud gaming service this far away. We did a test on this too with controller and mouse and keyboard lag. Check that out if you are interested.

RELATED:  Getting Started with Loudplay on Android

I also got constant hang-ups try to crossplay with others. Playing HALO Infinite multiplayer caused me to freeze for long periods of time constantly. This could be due to international game playing because my ping was borderline but still, I shouldn’t be frozen for this long.

The one thing I wasn’t expecting is that the Loudplay app supports local multiplayer easily. I connected over 2 controllers, various types of controllers with no issue. Not sure why anyone would do this but it’s possible.

Then, it happened. Loudplay upgraded their hardware! Now did this make a difference? Oh my god, no.

For some odd reason these hardware upgrades barely increased the performance. Looks like they might have a major bottleneck somewhere in their system. Check out full benchmark for details on this.

That was my overall experience with Loudplay on Desktop but the Android app is the kicker for me. I installed the app and signed in looking to hop right back into my saved remote PC. Get this, you can’t. Why? Because you need to sign up for a separate subscription to use the mobile Android version. WHY!? International tariffs.

The performance is the same as the desktop but it might seem better just because the picture is smaller. Don’t be fooled – it’s not. Just make sure you are on a 5GHz connection, or you’ll be really screwed.

I think you can tell what my overall feelings are for Loudplay. But if Loudplay is your only option depending on where you are located, I feel for you. I feel for you so much that I have a desktop promo code below to get 10% more credit hours on purchase. Everyone else should stay clear. STAY CLEAR. Another one bites the dust.

If you liked this review of Loudplay cloud gaming platform, make sure to like the video and subscribe and keep it locked right here at the only place where you can play in gaming heaven – Cloud Gaming Battle.